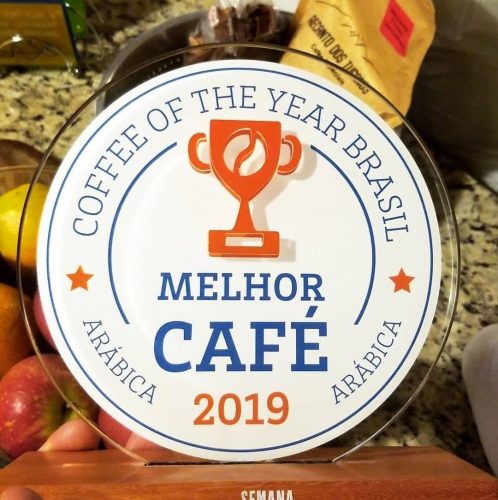 Among 500 coffee samples from 20 Brazilian regions, the coffee from producer Wilians Valério, from Recanto dos Tucanos the Best Coffee of the Year 2019 award. The contest is one of the most important in the Brazilian scenario and the selection featured a number of phases that included expert appreciation (arabica coffee Q-Graders), cupping tables, blind tasting tests public voting. At the moment of the final announcement, the Recanto dos Tucanos team took the stage, carrying syntropic agriculture’s name and also a beautiful story that lays behind this champion coffee.

We talked to Wilians Valério Júnior who is today the head of the Recanto dos Tucanos plantations, following his father’s footsteps. The history of the area is a very representative example of how an established coffee plantation can go through a transition to incorporate syntropic agriculture consortia and management principles.

: My father bought this ranch when I was ten years old. There was an area with 3,000 coffee trees and there was also some pastureland. He planted coffee everywhere. But, unfortunately, the price for the commodity was a challenge impossible to overcome. There was no market for special coffee at that time, so the cultivation was not worth it. Eventually, my dad gave up. He cut down all the coffee trees and planted fruits: pear, peach and olive. He kept cutting all the coffee sprouts to let the fruits grow.

We also interviewed Rômulo Araújo, agronomist, a friend of Recanto dos Tucano’s team and also a consultant of the ranch.

RÔMULO: The ecosystem is an Altitude Atlantic Forest. There are some Araucaria , Plinia , Euterpe edulis, Inga edulis, all of it growing in the surrounding. The place is very beautiful and ’ father plantation made the place even more beautiful: pear, peach, apple, quince, olive. His father is a very good farmer, everything he takes care of prospers beautifully.

Given the situation of commodity market of coffee and its price volatility, Willians’ father made the bold decision to change his main culture. Like a good farmer, he followed his instincts and invested in diversified fruit growing. By keeping the coffee trees pruned, Wilians’ father created the opportunity for the new trees to settle, synchronizing the growth of the entire system without eliminating the initial coffee trees.

: 40 years later, that is the area where I started to manage with syntropic agriculture and today the coffee that I am harvesting is from there.

RÔMULO: When Wilians started taking care of the coffee with his father, they let those trees do sprout. These coffees came back beautifully under the fruit trees. The pear in the emergent stratum, the olive in the stratum, the peach in the middle stratum. There were many things , but the bottleneck was still the production of organic matter within the areas. They didn’t predict any plantation between the main crops to be mowed and used to feed the trees. The big challenge of this transition, therefore, is to take a coffee plantation already established and produce biomass in the middle. Today we are putting a lot of banana trees in the middle of the coffee trees, in order to cut them and supply the system with biomass.

COFFEE IN THE WORLD

Coffee is an important crop worldwide, with a production of about 9 million tons per year. Near 125 million people in Latin America, Africa and Asia depend on this crop for their subsistence. Forty years after the price instability experienced by Wilians’ father, the ups and downs of the market continue to haunt coffee farmers around the world – a condition that now is aggravated by input prices that are rising, higher incidence of pests and diseases, more frequent droughts and irregular rainfall and climate patterns. On the other hand, the demand for specialty coffee indicates a potential expansion of crops that value the quality of the final product. So, it turns out that the central question is: what is the ideal condition for coffee production? For Ernst Götsch, coffee occurs naturally and originally in “semi-deciduous forests” and, therefore, these conditions are the ones we must replicate in our agro-eco-systems.

ERNST GÖTSCH: The coffee is from semi-deciduous forests. Semicaducifolia because it is a forest in which mainly the species that make up the canopy and emerging strata partially lose their leaves. Disturbance forests are forests of abundance, that is, they become forests of abundance and each disturbance event results in the rejuvenation and repetition of the work of the species that grow there. There are many species that are typical of disturbance: in the Americas, we have Spondias mombin, certain types of bombacaceae as well, peach palm and Euterpe edulis for example. We can induce this disturbance dynamics.

Plants classified by Ernst Götsch as typical of disturbed forests are those which in their original condition are naturally subject to disturbances caused by winds, hurricanes, etc. Cocoa would be another important example – we already talked about it  here. The reproduction of this dynamic of disturbances within the syntropic plantations happens fundamentally through pruning.

ERNST GÖTSCH: I plant, for example, coffee with Inga, or with mango or jackfruit trees or other fast-growing species. It can also be with Spondias purpurea, Spondias tuberosa etc. While these trees are growing, I harvest the cassava, which itself is a minor disturbance, just as when I remove the pineapple or prune the Cajanus cajan. When Ingas, jackfruit, mango and the citrus tree grow, at that moment happens an excellent effect on the coffee. But 2 or 3 years later, the farmer comes to the conclusion that his productivity is going downhill.

Shaded coffee production is not exactly new. Traditionally, shaded crops have always been practiced, especially in northern Latin America. Despite the recognized ecological advantages, this method is generally associated with low productivity. For Ernst Götsch, this effect is mainly related to the aging of the system as a whole. But, this obstacle can be overcome.

ERNST GÖTSCH: When this happens, the farmer has to learn, as I had to learn, to prune this system. With pruning, this system will have a lot of organic matter, not only from the fall of the leaves, but also a lot of material from wood, a lot of wood pruned – and the species mentioned are very good because they can handle pruning very well. The farmer has to do this pruning at a very specific time that is almost together with the harvest – it would be in May here on our subcontinent. At that moment he makes a strong pruning, if he has peach palm he takes the excess, prunes the Ingas, if there are many Carinianas, they have to be pruned too. This brings luminosity, mimicking the phase in which every tree from the canopy and emerging strata loses their leaves. Then also, at that moment, all the banana trees are cut down letting just some suckers. So, all the trees start to sprout again, in the middle of the drought season, in the short-day period, both respiration and evaporation are much smaller. At the same time, there is a very strong growth that causes the vegetation itself to drink water from the atmosphere and the organic matter in the ground retains water, protects it from evaporating, and the fungi, that will develop, also drink water from the atmosphere. Then there will be strong growth. Thus, there is a super-strong growth in the winter, that is, atypical for an accumulation system, and atypical anyway for a subtropical forest, which tends to stand still at this stage. But if you look closely, the lower and middle strata are overactive at that time when it comes to abundance systems. Therefore, we will favor this dynamic by pruning. In this way, the farmer will get faster and more strongly at a positive energy balance in consolidated life both in the sub-location in which he interacts and on the whole planet. That is, the farmer comes to a truly syntropic system. For this, it is very important that the trees are planted in high density and not in definitive density. It has to be a much denser planting so that the farmer can then select the best ones etc, and also because in the moment of pruning the trees cannot be too far apart otherwise there will be a lack of material. So, it has to be much denser than in an accumulation system.

The difference, therefore, in Ernst Götsch’s proposal of syntropic agriculture lies in both high density and biodiversity consortium as well as in proper management. This is what guarantees the reproduction of the dynamics of a disturbance forest and that will positively impact the fruitification.

RÔMULO: A regular shaded coffee plantation doesn’t have that dynamic. You just have coffee trees under old trees, the low stratum is removed, the regeneration that would ensure the trees of the future is virtually wiped out. Pruning work is not done, stratification work is not effectively done, you do not have a material deposition, do not have an opening of the upper strata for light to enter the low stratum at the right time. None of this usually happens in the shaded coffee plantations we see out there.

WILIAMS: I was already working on the idea of ​​organic, but as I got to hear about syntropic farming, watching the videos, I started doing some testing. It made me start to see things differently, but I still didn’t quite understand it. When I took the first workshop I saw how much I still had to learn. The biggest challenge was really believing in it because I had never seen anyone doing something like that near me. How was I supposed to believe? But I did and it worked. In the first pruning I did on trees I already saw the difference. Ernst says pruning is the “cat’s leap”, and really, he’s not kidding when he says that. He’s never kidding when he is talking about syntropic agriculture. We have to learn from it. If you do it from the heart, it works. But it has to be done, otherwise, it’s useless. Once I understood that I started to comprehend that it was simpler than I first thought, and today we participate in the system every day. When, for any reason, there’s a day when we don’t work in the field we get upset. 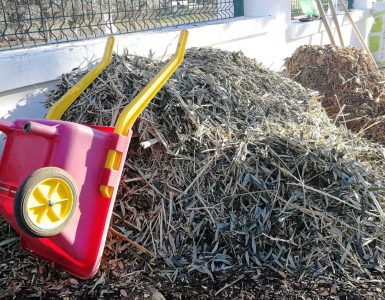 You have already seen here our experience report on the implementation of syntropic school gardens. We also have shared the theoretical foundation behind this initiative and some reflections derived from the practice...