Eucalyptus: another scapegoat of our society

In this week’s article, we will answer one of the most recurring questions we get: “why do you like eucalyptus so much?”. To begin with, it’s important to say upfront that we don’t prefer eucalyptus more than any other resilient and efficient species. But for many people, eucalyptus represents the villain, and the fact that Ernst Götsch includes it as one of the key species in many Syntropic Agriculture’s designs opens space for an interesting debate. The eucalyptus has become the scapegoat of many environmental issues, a species condemned to bear the blame for others. Therefore, it is important to clarify: after all, why do we use eucalyptus?

CONTEXT | The reasons why we like eucalyptus are not so different from those in the industry. It is a fast-growing plant, resistant to adverse soil conditions, does not need as much care and, of course, produces lots of biomass. For the industry, this biomass becomes paper, packaging, furniture, houses, fences, pencils, etc. For us, it becomes fertilizers, wood and biochemical information. Eucalyptus has an accelerated metabolism, it is an efficient photosynthesis machine. That means a lot of sequestered carbon and, when well managed, the improvement of soil fertility, not the contrary.

CHARGES | Accused of causing fires, degrading soil and drying springs, eucalyptus is a popular villain. As Ernst says, since eucalyptus doesn’t have a lawyer and doesn’t speak our language, it can’t defend itself. But the problem is not the eucalyptus. All these negative effects are consequences of the way it is cultivated. The organization and management of monodominant eucalyptus crops condemn the ecosystem to degradation. It is not the plant’s fault. Our production system is the one to blame. Any other species grown under these same conditions would reproduce similar damaging effects of what is known as “green deserts.” Monocultures of eucalyptus (and any other tree species) reproduce the dynamics, architecture, and effects of an aged-climax forest shortly before the clearing formation. It means that the highest crown density is concentrated in the higher strata, with little vegetation below or, even worse, no vegetation at all – a situation guaranteed by successive applications of herbicide in conventional monocultures. This degrades the soil and dries the environment making it vulnerable to fires.

CLEARING’S NATURAL LOGIC | When the very slow-growing trees of a climax forest reach maturity and begin to close the canopy, it is a sign that the system is preparing for the clearing. At this stage, the decrease in light incidence in the lower strata eventually causes them to decrease their density. The absence of vegetation in the sub-forest means less biomass production and, therefore, the soil is less protected. This allows the entry of dry wind that removes moisture from the soil, increases the temperature and, consequently, causes drastic changes in thermodynamic interactions. The soil gets warmer than rainwater, preventing water from flowing via gradient difference and, quite the opposite, it helps the soil expel moisture, which increases compaction and degradation. These conditions create an ideal environment for various types of vines and lianas. They grow up to the tall trees and tie them to each other. When one aged plant falls, others also fall. This is how clearings naturally happen.

BAD COPY | An eucalyptus monoculture reproduces the form and function of the senescence phase of a forest, that is, its final moments before crumbling. The difference is that in the natural cycles, the ends are linked to new beginnings, always with an increase in complexity. Between the beginning and the end of a cycle, the energy balance of a forest clearing is positive. There is an increase in natural capital. When the low stratum reduces its density, it happens without loss of genetic reserve. On the contrary, as soon as the clearing is opened, the whole seed bank is immediately triggered to start a new cycle, along with new plants brought by dispersers. Not only does the forest create life-friendly physical conditions, but it also transforms the biomass accumulated in the current cycle into an investment for the next one, in an exponential increment of complexity. Not by chance, fertility increases in any natural ecosystem free of human interference. 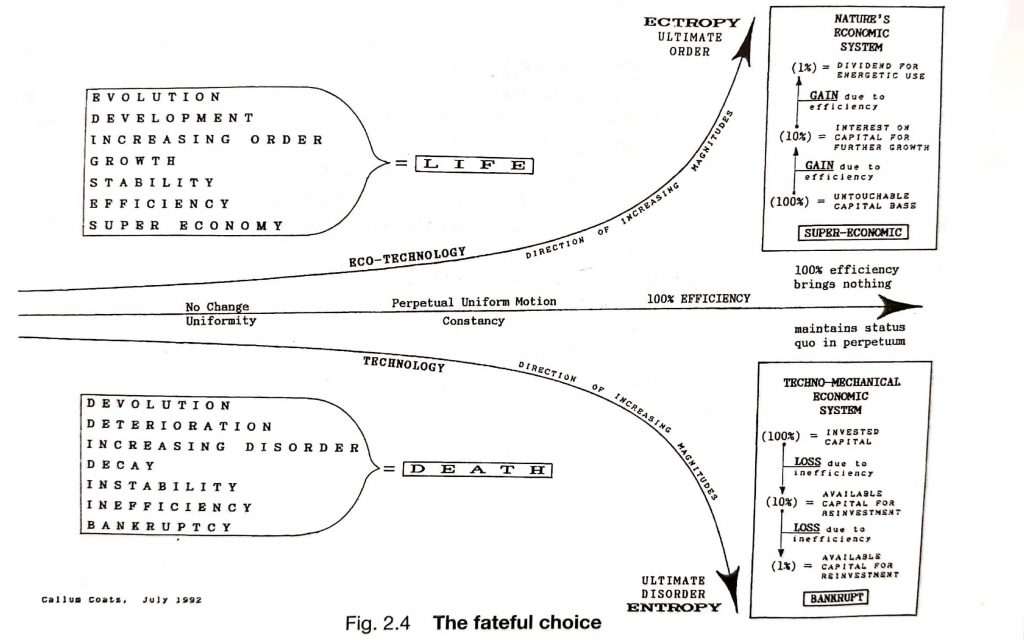 Today’s agriculture paradigm reflects our techno-mechanical thinking. We lose natural capital in every step of our productive cycles. Schauberger and Ernst Götsch came to the same conclusion: we should understand and apply Nature’s economic system into everything we do, as it provides the true gain in resources. The pure techno-mechanical logic aims for the most efficient way to explore resources, whereas nature-based processes focus on the best way to create them. Figure extracted from the book “Living Energies“

STRATIFICATION AND CONSORTIA | All negative effects attributed to eucalyptus would not occur if it were planted in consortium with other species. In stratified and biodiverse systems – with several floors occupying different bands of light capture -, thermodynamic effects guarantee a microclimate favorable to life processes. For example, the design that Ernst implemented at Toca Farm had guinea-grass underneath, fruit trees in the middle and upper strata, and eucalyptus in the emergent layer. One would expect a disastrous result when combining two famous heavy-drinkers plants in an unirrigated area, such as eucalyptus and banana. Not at all. This system survived the famous water crisis of the State of São Paulo in 2014 without much damage. At the peak of the drought, we witnessed banana plants with their leaves wide open, in a clear sign of no stress. The stratification organizes the plants vertically in order to function as an economic-flowing water station. Hence comes the celebrated Ernst Götsch’s phrase, “water is planted.” Not because where there is water, there is life. But the opposite. As Götsch states, where there is life, there is water. 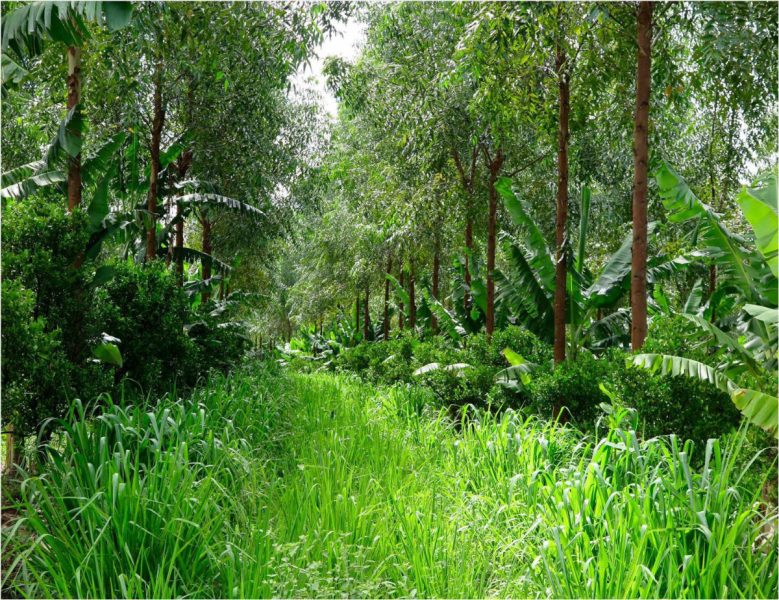 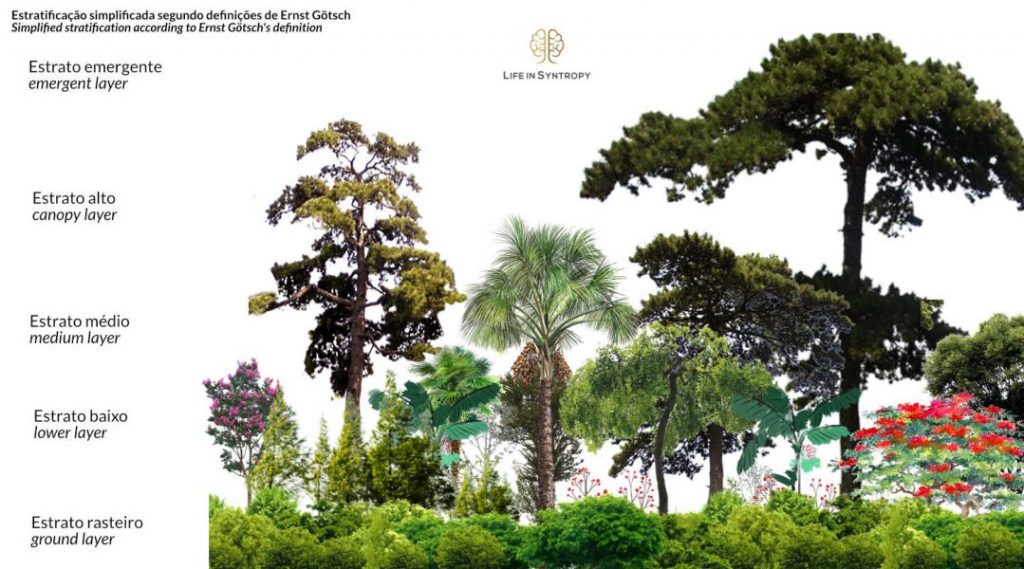 THE REAL WATER SUPPLY | Viktor Schauberger studied that in natural forests the soil temperature is usually a few degrees colder than the local rainwater. It means that in addition to the rain that naturally reaches the ground by gravity, it is also true that the soil “drinks” water by suction. That is, infiltration also occurs by differences in temperature (it flows from hot to cold). Having photosynthesis in different layers also contributes to that. A soil constantly covered combined with denser lower strata with a decreasing occupation in taller trees allow a gradual overlap of light capture bands. That is not all. Photosynthesis is an endothermic process (instead of emitting heat, it cools down the environment). Therefore, these gradual layers function, according to Götsch and Schauberger, as bio-condensers, capable of pumping water through thermodynamic processes. 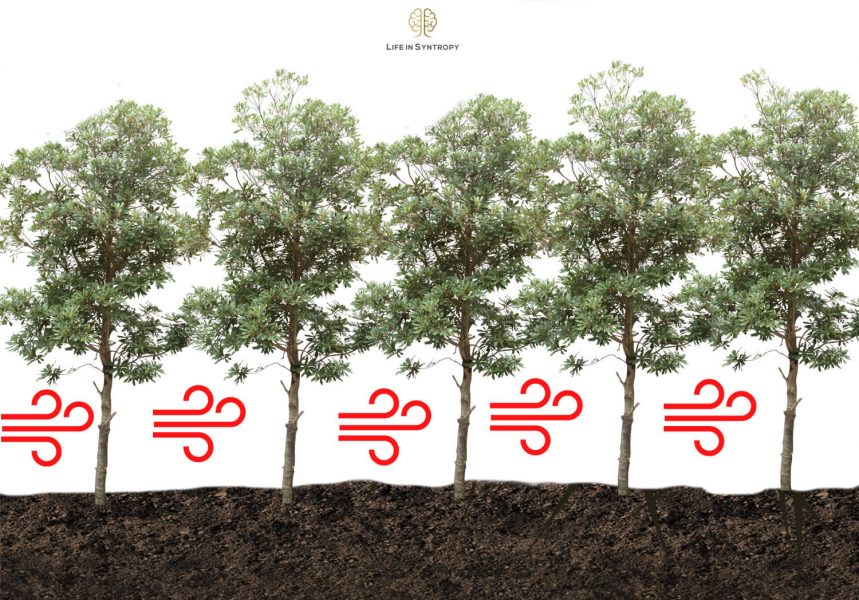 Te absence of lower vegetation layers warms up and dries out the soil.

EUCALYPTUS HELPS REGENERATING NATIVE ECOSYSTEMS | Including different species in layers would already be very good. But still not enough. Plants of different successional stages must be included. According to Ernst’s classification, eucalyptus is an emergent stratum tree, which establishes itself in the early stages of secondary forest and has the ability to transition up to the climax stage if there is no one to replace it. It is a fast-growing plant and can live a long life, accompanying the forest until its maturity. For example, on our farm in Rio de Janeiro, Ernst planted, among several other species, eucalyptus and “Centrolobium tomentosum”, both emergents. The first, fast-growing, helped to create the second, native climax tree with valuable wood. If we had planted the “Centrolobium tomentosum” from the beginning, the seedlings would not have survived the sun exposure. The eucalyptus pulled the “Centrolobium tomentosum” growth thanks to its shade, biomass, and biochemical information. Pruned twice a year, eucalyptus spreads out enzymes and growth-related hormones to its neighbors, as well as provides nutrients and protection with its biomass (which can be fragmented – or not – and organized in the tree lines). Unquestionably, an exotic and hated species helped establish a more demanding native tree. Instead of eucalyptus, we could have used other emergents, for example, “Schizolobium parahyba” or “Trema micrantha”. We are not particularly attached to one species or another, but to the organization and dynamics of plants in space and in time. Thanks to its characteristics, eucalyptus could be a great ally in the recovery of degraded areas. 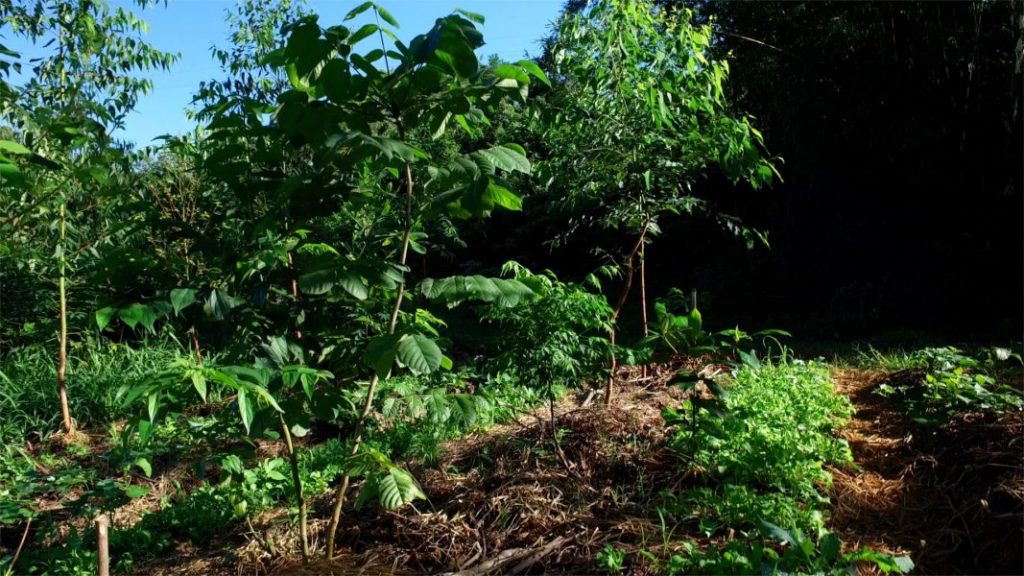 So here’s an invitation: let’s make our own tests and retell the story from our real experiences, without false heroes, but also without scapegoats. By focusing our frustrations on eucalyptus and not on the logic that legitimizes its plantations, we lose the chance to identify the true source of the problems, and end up doing very little to actually solve it.